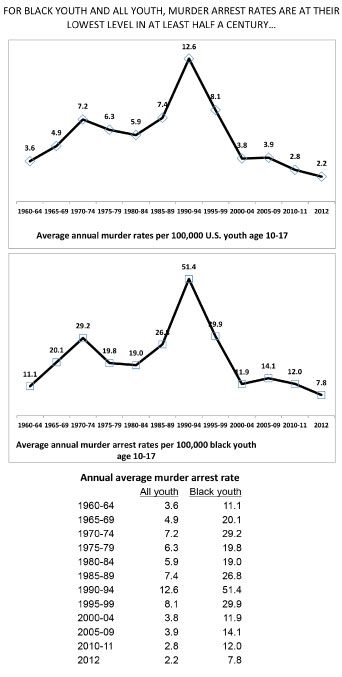 One goal of YouthFacts is to enable researchers, students, reporters, and other interested parties to see original sources of information on youth issues so that the way interest groups’ often misleading, partial, and just plain wrong information can be exposed.

This series of tables showing criminal arrests and arrest rates by age for U.S. youth and adults by age group for Part I and other offenses of interest for 1960 through 2011.

These tables are taken directly from the FBI’s Uniform Crime Reports (Table 38 in 2011 and corresponding tables for previous years) and adjusted for percentage of the country’s population covered by the report each year (see Populations by age table for populations and adjustments used, which have now been updated using 2010 census figures).

These tables (35KB) can be downloaded into Excel or similar spreadsheet programs. Data tables on other issues such as violent deaths by type will be assembled and provided here later.