For the last 50 years, “experts” and their politician and media disciples have been warning that America’s growing, racially diversifying young population (that is, more Latino and African Americans) would wreak all kinds of youthful havoc, led by crime, violence, drug abuse, street slaughter, juvenile superpredators, teenage psychopaths, and every kind of mayhem.*

What actually happened? California is the leading edge of demographic change: 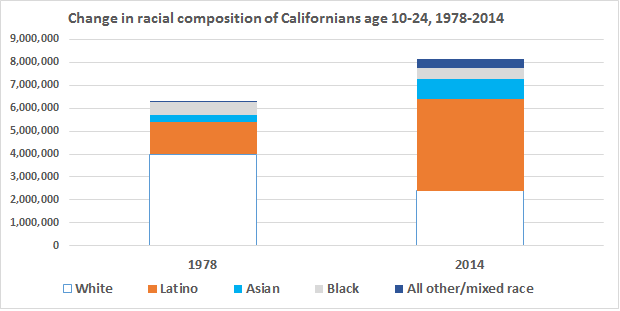 Pretty straightforward. As California’s young population age 10-24 rose by 1.8 million over the last 35 years, the number of non-Latino Whites fell by 1.6 million, the number of Latinos rose by 2.6 million, and the proportion that is White fell from 63% to 29%. Couldn’t be more dramatic.

Here’s some more drama: the massively divided changes in felony rates by age: 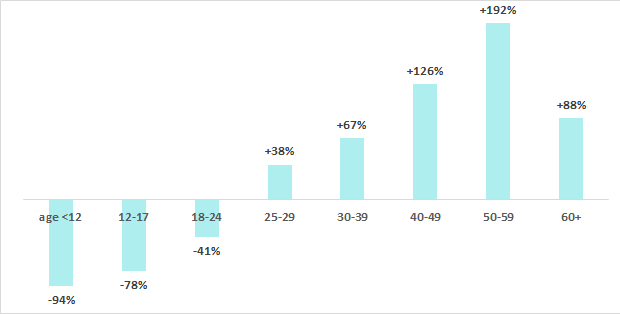 Now a complicated one showing crime rate trendlines by age group. For those who believe anything authorities and their media sycophants say about youth and adult crime, it’s worth close inspection:

Note several fascinating trends that authorities not only failed to predict, their theories and declarations insist they could not possibly have happened.

These are cataclysmic, revolutionary trends in our largest, most rapidly diversifying state, which has proven a harbinger of crime trends nationwide. They are overturning every theory we have of crime, race, and age. Can authorities handle this kind of change and its implications? So far, no.  (Mike Males)

——————————-
*Northeastern University criminologist and former Bureau of Justice Statistics authority James Alan Fox is recognized as America’s top expert even though he has never been even nearly right in 35 years of youth-terror crime forecasting. In the latest breathless forecast, a Crime & Delinquency paper so sloppy it never should have been published, Fox and University of Texas criminologist Alex Piquero based on “the age/race/gender composition of the population” (translation: the numbers of teenage and young-adult black and Latino males) predicted over 10,000 murderers age 14-24 per year by 2014. The actual number was less than half that.